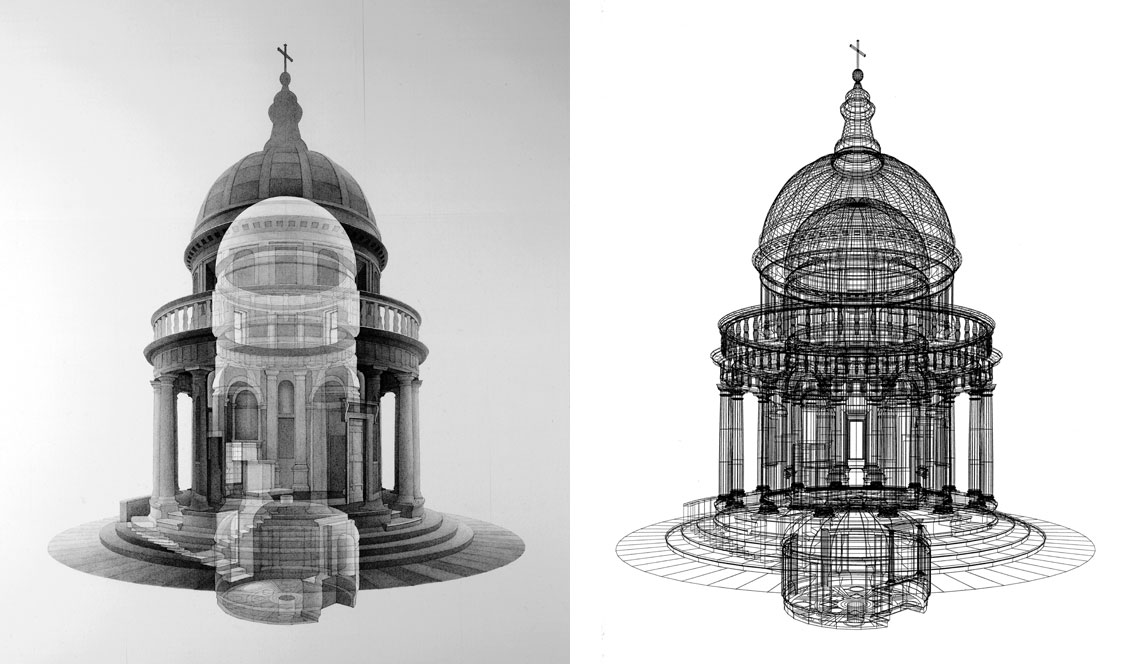 Side by side views of Bramante’s Tempietto. On the right, a computer generated wire-frame. On the left, a black and white pencil “jellyfish” rendering of the same.

Daniel Castor’s drawing of Bramante’s Tempietto offers a definitive but surprising perspective on one of the most famous buildings in the history of architecture. Through transparent walls, one can examine the interior from a point of view outside the building. By modulating the visual opposition between solid and void, the drawing balances form and space. The resulting image turns the building – as well as our preconceptions – inside out.

Built (ca. 1505) by Ferdinand and Isabella of Spain to commemorate the martyrdom of St. Peter, the Tempietto is by all accounts the culmination of the Italian High Renaissance, the purest expression of that artistic period in built form. Designed by the Milanese architect Donato Bramante, it encapsulates principles of design that have continued to influence the theory and practice of architecture to this day.

In the attempt to understand and codify these principles, a long succession of architects and historians have drawn and redrawn the Tempietto. Palladio admired the building so much that he included it in his survey of ancient Roman monuments. The French draftsman Letarouilly obsessively calibrated his measurements to the millimeter. Doctoral candidates from the University of Bamberg recently mapped every tile and joint in the building.

But what has never been gained from these investigations is an understanding of how the Tempietto presents itself experientially, in space, through the interplay of light and shadow. The draftsman Daniel Castor has developed his so-called “Jellyfish” technique as a way to bring to life interiors otherwise unseen. In this subtle, layered interpretation of the Tempietto, he is able to capture, in two dimensions, the dynamic spatial complexity of Bramante’s design.

Seen from outside, the building appears perfect, aloof. But the drawing reveals a secret. Twin stairs arc down to a crypt, which is lit naturally – but only through a brilliant sleight of hand. The vaulting over the entry is carved out, passing through the floor and into the altar upstairs. A window opens into this cavity and lights the crypt, but nothing in the space upstairs would suggest the presence of a window inside the altar.

The altar, so voided, becomes in the same gesture a threshold for the light that illuminates the sacred crypt. The Tempietto is considered paradigmatic, but like all architecture it must confront basic problems of lighting and circulation. The audacity of design displayed in the crypt upstages the nobility of proportion found in the building as a whole. In this way, the drawing reveals the Tempietto at its most compromised – and its most ingenious. 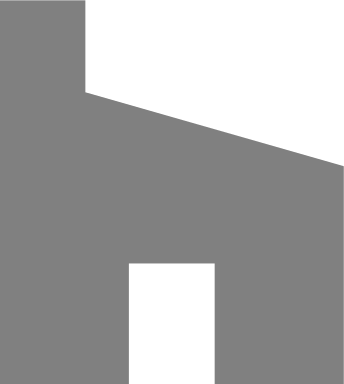